The magic of instant effect generators takes a ho-hum or flawed photo and transforms it into something unexpected and unusual. What I like about these types of apps is that at each tap of your pad (or human finger), effects, overlays and borders randomly apply themselves. Instantly. Right on your phone. Meowee, over 2 million possible combinations can make it a real challenge to like just one. So for Sally’s Mobile Photography Challenge this week, we used the same photo with two different outcomes. There are several apps that do this but the one we’ve been using is called Pixlr-o-matic, and is free to download to your iPhone, and probably Android too but we don’t use them to know fur shore. Hipstamatic is another as is Snapseed. 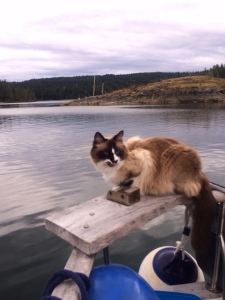 I must have tapped about a hundred times until I decided on the looks I liked best for this photo. You can also makes minor tweaks to change any element of the combo. This ho-hum photo is of meow sitting on the stern rail where the prawn puller gets attached. I was trying to give the humans a hint. Turns out i didn’t have to try too hard; they managed to haul up almost 500 of them overall this cruise. Behind me is doggy-doo island in Squirrel Cove on Cortes Island that the humans took me to play on. As my nickname for it implied you had to be careful where you stepped and that didn’t impress meow much, and I just wanted to go back to Minstrel. The camera focused more on the island than meow so I’m a little blurry. A little insta-magic editing made the save.

In the first photo, the effect is called “Greg“. All the effects have people’s names and they are supposed to set the mood of the photo. The overlay is called “Rain“. It was actually was raining that day. Thirdly the frame is called “Sloppy“. The result? Kind of a pop artish look don’t you think? 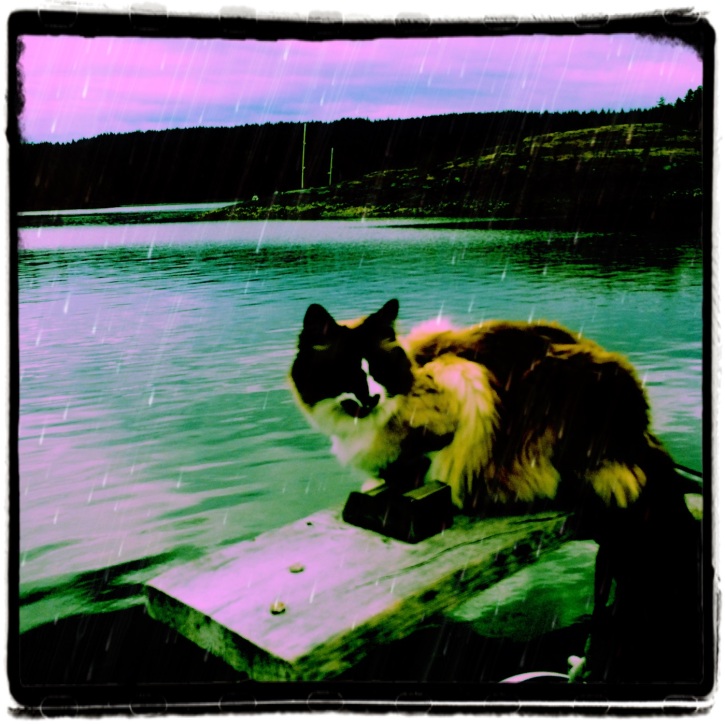 For the next photo, a few more taps and we have the “Lucas” effect, “Morning” overlay, and “Sand” frame. Seems to give it a bit of a washed out retro feel.

So many looks, so little time. What phone photo editing apps are you using?