This year Easter was early, and with it was my human mom’s birthday and our first cruise of the year. (Since she forgot my birthday we don’t really need to know about hers.) Destination Union Steamship Marina on Bowen Island is about a 2 hour journey for Minstrel from our marina in Port Moody. About halfway there we’d left the more sheltered and calmer waters of Burrard Inlet and became exposed to the Strait of Georgia when I suddenly didn’t feel so good.  My human was watching me for “the signs” and as soon as she saw them, in true mom style she whisked me up in a blanket and sat outside in the fresh air with me. After about an hour I felt so much better. 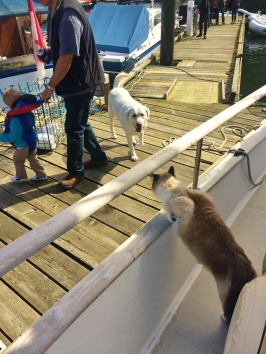 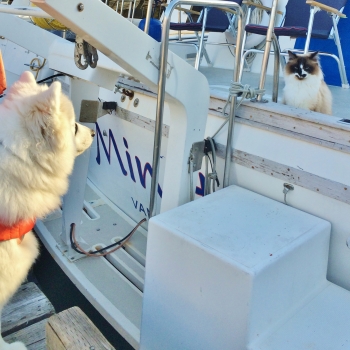 We were there for four weather perfect days. Although my human dad didn’t win the Crabmeister contest, he didn’t disappoint either with a decent catch of both crabs and prawns. He’s my Easter bunny hero. The boats on either side of us had dogs. Peaches was on our port side and Tank was on our starboard. Except for when the dogs left for walks, I mostly behaved and stayed on our boat and greeted all who walked by. My furiend Krypto the yellow (but white) lab was there and came over to say hi, and I also met a new furiend, a white husky whose name I can’t remember but was very interested in meeting me since apparently she’d never seen a cat before. She seemed nice and was a big hit with all the humans. 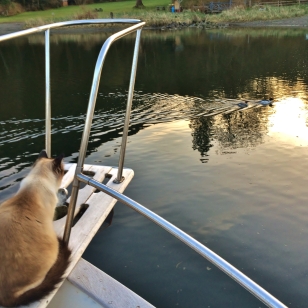 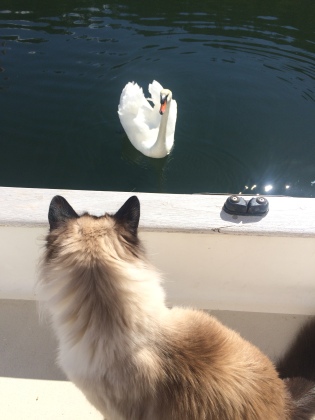 I spent much of my time on the anchor board, my favourite place at the bow of Minstrel, watching the shore or whatever flew or swam by in front of me. I saw several ducks swimming by who didn’t pay any attention to me,  but what did notice me was a big bird I had never seen before. My human call it a swan and his name is Oscar. He lives at the marina and is not shy around humans, probably because of all the treats they give him especially after they hear the sad story about his mate dying. He seems friendly enough but he does make me feel a little nervous.

Last but not least are those annoying geese. I was trying to take a nice little cat nap when a big ruckus started up outside. The honking of one goose I can handle, but when there’s four of them, I had to go out and let them know I wasn’t impressed. Geese can be very noisy especially during mating season. The worst part was the strange long drawn out ohms between honks. My human thought it was rather funny and took this video.

Our next cruise will be the long weekend in May and close to home. I hear there’s going to be a Gilligan’s Island costume theme with a 3 hour dinghy cruise scavenger hunt. In the meantime, I’m still hoping to get some more votes during the BC SPCA 2017 Calendar Contest, and there’s one more week left. A big thank you to those that donated and voted to support a very good cause including my friend and cat mom Ellen Pilch.