The destination of day 10 on our cruise was originally unplanned. My human dad is the cruise co-ordinator for this cruise which means he plans where and what the fleet goes and does, to a point. The humans can go wherever and do whatever they like, but generally the close knit fellowship likes to cruise together, and newer members like the safety of cruising with a group. My human had only pre-planned our first week, and then called a meeting of the humans (which is referred to as a “Skipper’s Meeting”) to drink some silly juice (Scotch) and suck on some smelly sticks (cigars) while they discuss where to go next. I got out a map and wanted to make sure they knew I had a few ideas of my own. 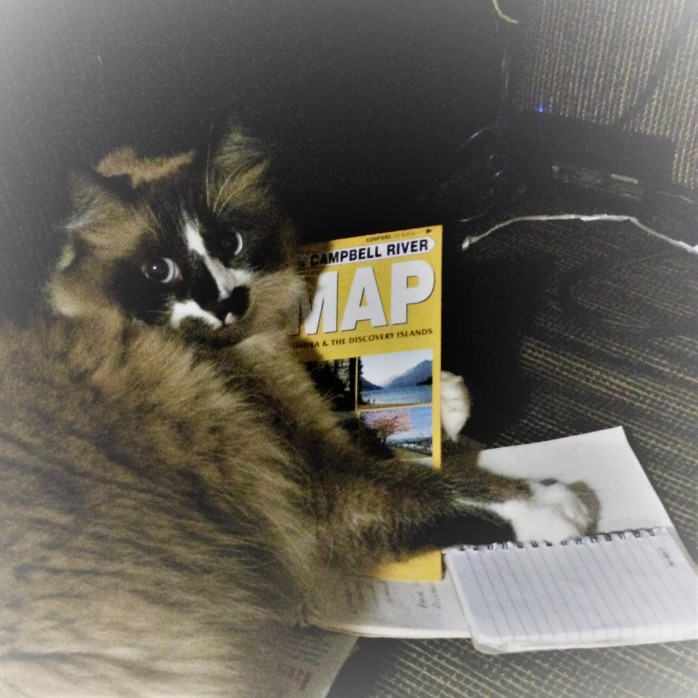 Before we leave, My human mom decided we needed to come up with a squadron geocache in Melanie Cove and hide it. She hid it on the rock cliff behind our boats; pawesome view of our raftup from there. Minstrel is second from the left. She was a bit disappointed that we didn’t have a “first to find” token to put in it, but instead thought after we get home, she’d set out another geocache in Bedwell Bay, our favourite weekend anchorage. In that one, she’ll put a trackable and give it a mission to go to the Melanie Cove cache, and maybe even another squadron cache in Ontario. We’ll see. It may take a few years, or it may never get there. Claws crossed. We’ll be listing them on Geocaching.com soon. 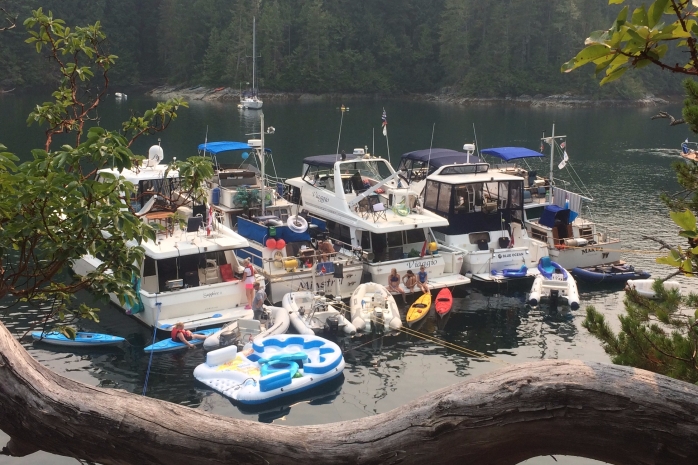 So the humans choose Gorge Harbour on Cortes Island. We had been there a couple of times before so I approved. But because we didn’t have the week planned, we didn’t make reservations at the marina, like a couple of the other vessels in our fleet did “just in case”, so unless there are any cancellations by the time we get there, we will be anchoring again. Maybe this time we’ll find the geocache that my human mom tried unsuccessfully to find the last time.  Paw paw for now. 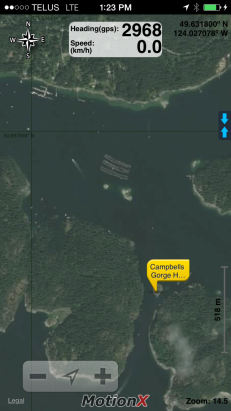 There was no cellular service in Gorge Harbour but human mom checked before we arrived and knew there was a geocache in the area. The marina had a strict check out time so she only had about an hour to kayak over to the island, find it, and return before we had to leave. She had manually put the GPS coordinates into her iPhone Motion X app as a waypoint, and was able to navigate offline to the location. The GPS works without cellular service. Unfortunately she couldn’t find it because she forgot to write down the clues. She’s sure she would have found it if she had a bit more time because she was very close. She’ll try again next time. 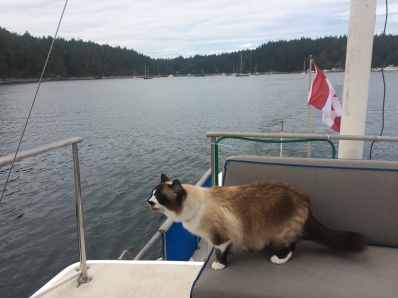 As we left I checked the air and the sky to determine what kind of travel day we were going to have. Even humans used to rely on observation, patterns and folklore to avoid being caught off-guard by the elements before technology was around. This is how I do it. First I determine the direction of the wind on my whiskers. Easterly winds, which blow from the east, can indicate an approaching storm front; westerly winds mean good weather. Strong winds indicate high pressure differences, which can be a sign of advancing storm fronts. Then I take a deep whiff, close my eyes and smell the air. In a low pressure atmosphere, plants release gases, generating a smell like compost and indicating an upcoming rain. I also check for humidity. You can feel humidity, especially in your fur. If it’s curling up and getting frizzy, then the humidity is high, which tends to precede a heavy rain. Lastly I watch what the birds are doing. If they are flying high in the sky, there will probably be fair weather. Falling air pressure caused by an imminent storm causes discomfort in birds’ ears, so they fly low to alleviate it. Seagulls tend to stop flying and take refuge along the coast if a storm is coming. Birds get very quiet immediately before it rains. If you practice these methods you can become very attuned to reading the sky and air to gain the ability to predict the weather quite reliably. I was quite confident that the seas would be favourable as we headed East to Grace Harbour. 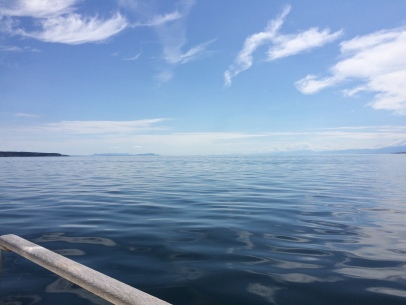 Looking south on the Strait of Georgia heading east.

Just as I thought, the day turned out spectacular for the 3 1/2 hour cruise to Grace Harbour; a flat calm sea and a blazing sun. The humans got quite a bit browner after today, especially mom in her bikini. We met up and rafted with the 4 other squadron vessels that had left a short time ahead of us. Human dad headed off with his fishing gear again while human mom kept cool in the water with the other humans. Before long he was back with a couple more pink salmon. He’s my hero. 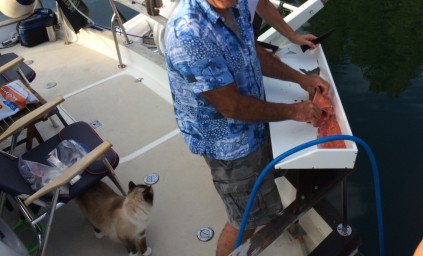 Hanging around the fish cleaning table, watching the 2 freshly caught salmon get cleaned and filleted. 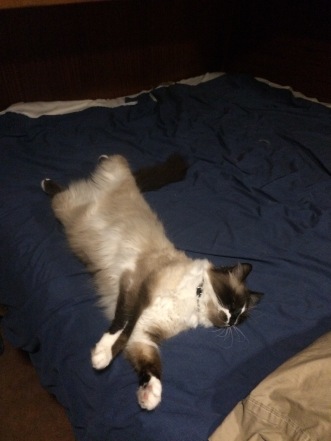 The raft-up separated slightly this morning with 3 vessels heading to Princess Louisa Marine Provincial Park, and 5 heading west to Gorge Harbour; about a 3 hour cruise for Minstrel. The water was calm and a pleasure to boat through. The skies were showing patches of blue, and the temperature was maintaining it’s warmth. I’ve quite taken to sleeping now while we travel; it helps passes the time very comfortably.

Before I knew it Minstrel was tied up to the dock at Gorge Harbour Marina. The main dock sections were double wide and it felt like land. But before I knew it, I was tied up too. Mom read a sign further up the dock that advised guests that all dogs had to be on a leash while on the dock. So when human mom saw me wandering off the boat, she wasted no time in putting my harness and leash on me. Wait, I’m not a dog!

This place was rather uneventful for me. In the afternoon, the humans went swimming in the pool, then to the restaurant fur dinner with the other humans, so there was no opportunity fur catching a fish or some prawns today. I’ll just have to catch them in my dreams fur now. 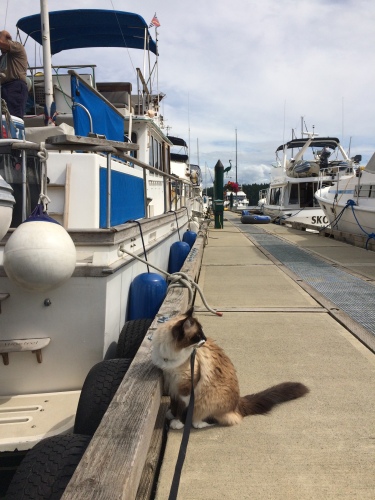