Photography 101 Day 15 It’s a big world out there! Show us what you see in a landscape. We’ve spent time practicing our establishing shots, capturing street scenes, and observing the natural world. Today, let’s walk in the footsteps of masters like Ansel Adams and focus on landscape photography.

Ansel Easton Adams (February 20, 1902 – April 22, 1984) was an American photographer and environmentalist. His black-and-white landscape photographs of the American West, especially Yosemite National Park, have been widely reproduced on calendars, posters, and books.

Some pawsome seascape views of the Pacific West Coast. The coastal mountains and majestic fjords of the Pacific West Coast can reach up to 7,000 feet from sea level, creating some very layered and stunning backgrounds. While I consider these serene shots to be in direct contrast to the hard and dramatic scenes typically captured by Ansel Adams, hopefully they still follow the “straight photography” style that he pursued.

SPOILER ALERT!…Today furiends, the second photo was taken my human dad…meowee! He likes taking pictures too, and his Bedwell Bay, Indian Arm, BC photo (the colour version) will be featured in our PMPSS 2015 Seascapes calendar that my human mom published with the help of the membership who supplied their photos.

Photography 101, Day 12 Study architectural forms, and also train your eye to look for shots that will translate well in black and white. As we explored yesterday, color is a powerful element in photography. But let’s not forget black and white, or monochrome, which can be very dramatic! Black, white, gray, and shades in between interact in the frame in dynamic ways. 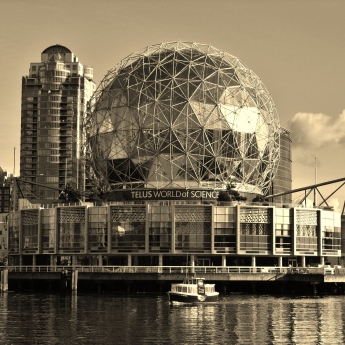 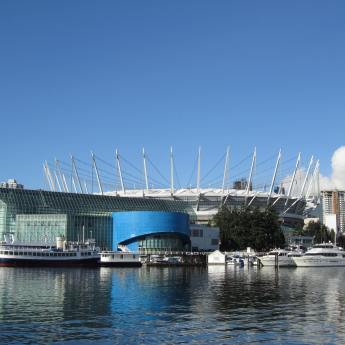 BC Place Stadium, Vancouver, BC 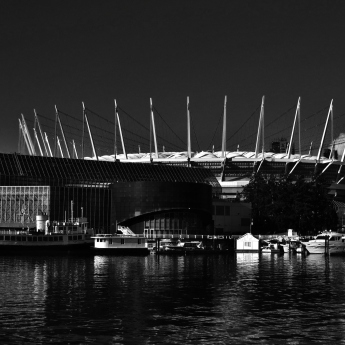 Boating around in False Creek one day (before I was born), mom took some photos of these two iconic buildings in downtown Vancouver, BC…Science World and BC Place Stadium. These places hold a few special memories for her. About 15 years ago, mom and her human sons, along with several hundred others human boys and adult leaders, slept in Science World overnight once as part of a Scouts Canada event. It got a little crazy she said, but was a lot of fun. A night she’ll never forget. Unfortunately none of the photos she took that night turned out.

BC Place stadium is home to the BC Lions football team, and in 2011 Vancouver hosted the 99th Grey Cup game. The humans cruised downtown in Minstrel and partied all weekend long during the festivities. It also got a little crazy, but was a lot of fun, and the Lions ended up winning the championship! With mom’s help, dad managed to get all the pawtographs of the Felion Cheerleader Dance Team featured in their calendar, which he gave to his nephew for Christmas. Meowee, they shore are purrdy fur humans! Vancouver is once again hosting the Grey Cup at the end of this month. Unfortunately the Lions aren’t in it.

I helped mom choose the black and white settings for today’s theme. We didn’t realize there were so many combinations of black, white, gray and monochrome! You can click on the photos for a larger view. We hope you like the results.

Princess on a mission