April point on the west side Quadra Island is the gateway point for major fishing excursions or to cruise north to the Discovery Islands. The marina we are in is located in the cove east of April Point Resort in a quiet secluded & protected bay. I was busy trying to make sure the neighbors were sociable and I met two little doggies names Cloe and Zoe….this my new furiend Cloe. However I got a little too adventurous and my humans had to keep putting on my harness and lead which worked to keep me off the other boats. 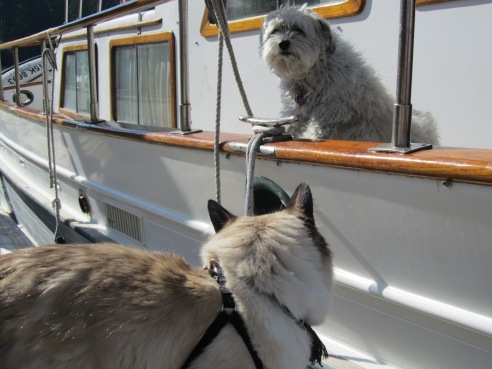 After an early night, there came an early morning and my dad loaded up his dinghy with a few long sticks with flashy parts on strings, and the dip net, and left. Then  after a coupe hours of tidying up Mom also left on a kayak.  By mid afternoon they were both  back from their little adventures; mom had found another geocache for me, and dad caught 3 fish for me…2 Coho salmon and 1 Pink salmon. Meowee fish! I helped dad clean and cut them up on the dock, and for my reward I got to eat the hearts. Unfortunately they were a little too much for my tummy and I had to give them back. I am assured I will get a more suitable feed of fish soon.

We’ve had to change our next destination which was to the north end of Quadra and around through the Seymour Narrows (a fun passage to navigate) due to some gale force winds up that way. Instead we are heading to a place called Rebecca Spit on the east side of Quadra Island. No more marinas now for about a week.  =^,,^=

5 thoughts on “Adventures at April Point”